More and more people are turning to sous vide cookers for a new form of home cooking. Not only are they efficient and portable, but they provide restaurant style meals not often enjoyed from the home. Here, we will take a look at three separate sous vide cookers and determine which is the best for home use.

Some factors to pay attention to as you go through this article include: temperature regulation, the quality of the LED interface, potential for bluetooth pairing, and water circulation capabilities. Ultimately, there are a number of factors to base your decision upon, but those three are big ones when considering a sous vide cooker.

I have reviewed three sous vide immersion circulator’s, the brands we selected – Forsous, PrimoEats and Souvia Commercial Sous Vide are great sous vide machines for home use. Each can use water baths or a precise cooking pot. I reviewed these because you can use a container most have readily available at home. All you need in addition is mastering the vacuum sealing plastic bag cooking methods.

Each of the machines also do not have Wifi or Bluetooth as it can be handy, but I believe with the correct cooking techniques with these circulator’s you can easily master the home cooked steak with restaurant flare. 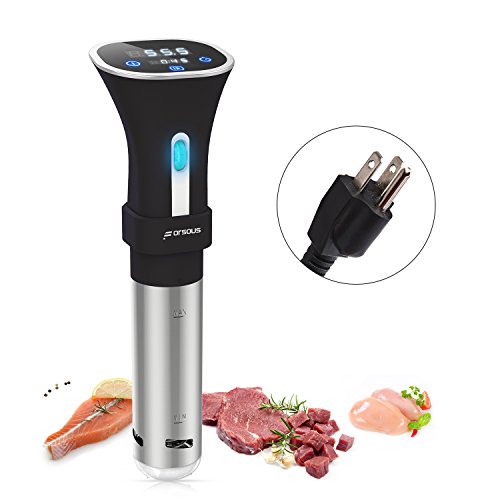 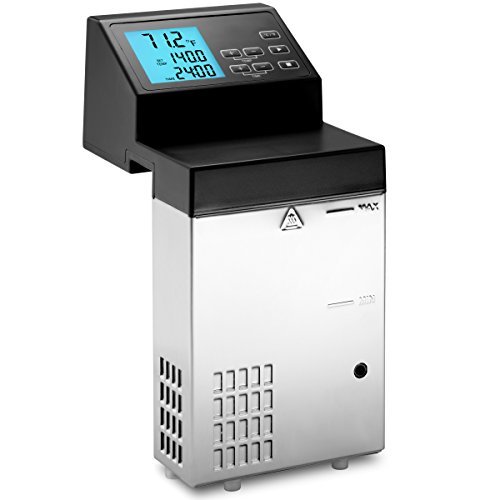 Each of the mentioned sous vide cookers has plenty of pros and cons. Ultimately, if you want restaurant-style meals from home, you want a device that can get the job done. With sous-vide appearing to be the latest in cooking trends, the internet is already being plagued with cheaply made cookers, that promise the experience but don’t deliver the results.

The number one product on our list for sous-vide machines fit for home use is the Forsous Sous Vide Precision Cooker. Although it certainly is not without flaw, it beats the PrimoEats Cooker for being capable of rising water temperatures to over 100 degrees Fahrenheit consistently.

Not only does the PrimoEats Cooker have trouble heating waters to above 100 degrees, but it has trouble distributing those waters as well, making for an uneven and under cooked final result.

The Souvia Commercial Sous Vide comes in second as it has certainly provided plenty of quality sous vide meals. However, a cheaply designed interface as well as a poorly constructed Celsius to Fahrenheit switch prevent it from taking first place.

Also, the fact that temperatures can fluctuate up to 30 degrees above or below the set temperature, is alarming enough to bump this product down to second place.

The Souvia Commercial Sous Vide advertise it as being able heat consistently water bath volume of up to 30 liters. The pump will provide consistent water temperature and it can circulate 7.5 liters of water per minute!

Overall, the Forsous Sous Vide Precision Cooker is a great sous vide cooker for both beginning and experienced sous vide cooks. If you’re looking to add that sous vide flair to traditional home cooked meals, this cooker is a great option. Its stainless steel design, as well as its easy to read LED display, add a sense of picturesqueness and make it a valuable addition to any kitchen cooking equipment arsenal.

On top of that, users can be comforted that the adjustable clamp makes it compatible with many different pots and pans. Most sous vide cookers are not versatile enough to acclimate to attaching to a variety of pans. The 800 watt power supply also makes the Forsous cooker great for quickly heating up liquids to a ready-to-cook temperature.

Ultimately, this drastically cuts down on the overall cooking time-period. Most of its parts are also completely removable, making cleaning easy to accomplish.

Unlike the Souvia Commercial Sous Vide product, the Forsous has no problem interchanging between Fahrenheit and Celsius. The LED display also is condensation repressive, allowing for it remain easy-to-read throughout the entire cooking process. Pound-for-pound, among the three products on this list, there is no doubt that the Forsous Sous Vide Precision Cooker is the sous vide cooker to go with.